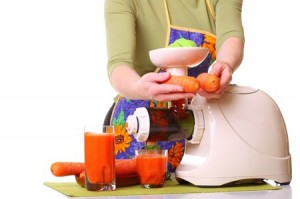 Searching with the best juicer machines ends up with at least different answers based on five qualifications:

To separate the juice from the flesh of the fruits and vegetables, you basically have two choices. The first is to grind them against a mesh which is usually done through centrifugal force. Centrifugal juice extractors are the most common type of juicer.

Your yield depends on how the mesh cuts up the fruits and vegetables and how fast the machine spins. The finer the mesh, the less pulp passes through. The faster the machine turns the more force it generates to push the juice through the mesh.

This is where two disadvantages of centrifugal juicing machines enter the picture: Clogging and heating.

To get less pulp, you need a smaller size mesh which means the juicing machine clogs faster and you need to spend some time unclogging the mesh during the juicing process which could be a hassle. The friction of a high-speed engine, as well as the friction between your produce and the mesh, creates heat which could damage sensitive enzymes and nutrients in the juice.

Your juice oxidizes faster with heat which becomes a double whammy in destroying what you are trying to preserve – The nutrients.

The second way of extracting juice from the flesh is to squeeze it. You can do it caveman style which we all do at some point regardless of our gender. The process is fairly simple, cut, squeeze as in lemon for salad. You can even forget about cutting and get a presser with a handle. Put the helpless orange in the iron jaws of the pressing machine and hank on the handle to squeeze the heck out of it. Norpro Stainless-Steel Citrus Juice Press and Jupiter Large Commercial Juice Press are examples of this.

Besides being very messy there are two major problems with this method and juice pressers. The first is that you cannot extract the juice this way from many of high nutrient foods like wheatgrass. Forget about juicing carrots or beets this way. So you miss out on their health benefits.

The second problem is that even in those fruits you can press have much of their nutrients in part of the pulp like the white inner part of the skin in oranges. Pressers leave all that behind too.

The third way of extracting the juice from flesh through squeezing is through a process called masticating. The fruits and vegetables are squeezed very slowly between winding and turning augers. Every part is broken up and all the juice is squeezed out from every part which gives you the highest yield with the highest amount of nutrients.

Omega J8006 Nutrition Center Juicer is an example of this. At only 80 rpm it is low-speed which keeps everything cold and preserves healthy enzymes and reduces oxidation. Because these juice extractors remain cold, they are also referred to as cold press juicers. Even though Omega masticating juicer is a single auger, its GE Ultem Auger is 8 times stronger than most other plastic augers.

If you don’t have a budget limitation and want to avoid health concerns associated with plastic, you can move up to a double auger juicing system without any plastic component. Super Angel All Stainless Steel Twin Gear Juicer- 5500 is an example.

To compare masticating juicers, you’ll need to look at vert juicers. The original masticating design was horizontal which takes up a lot of counter space. This could be a problem for many homes with limited counter space. A vertical design reduces the counter space which makes it more practical to have a juice extractor at home. However, like everything else in life, there is a give and take. Vertical designs like Omega vertical masticating juicers produce less yield than their comparable horizontal omega fruit and vegetable juicers. Over time less yield means you have to buy more produce to get the same amount of juice which increases your out-of-pocket cost.